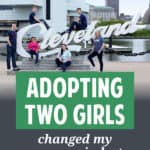 I’ll never forget the moment I got the text message from my wife: “Do you want to adopt two girls?”

I was at work. We’d been exploring adoption for the previous year but had hit some roadblocks. Adoption wasn’t really on my radar anymore, and we had never discussed adopting more than one child.

And if I’m being honest? Girls weren’t really on my radar either. We have two biological sons, and I thought one more boy would be nice. Adopting two girls wasn’t part of the plan.

But my response? “Sure.”

At that moment, regardless of my preconceived thoughts and dreams, I knew I was supposed to say yes. I felt it inside of me. I’m glad I did. 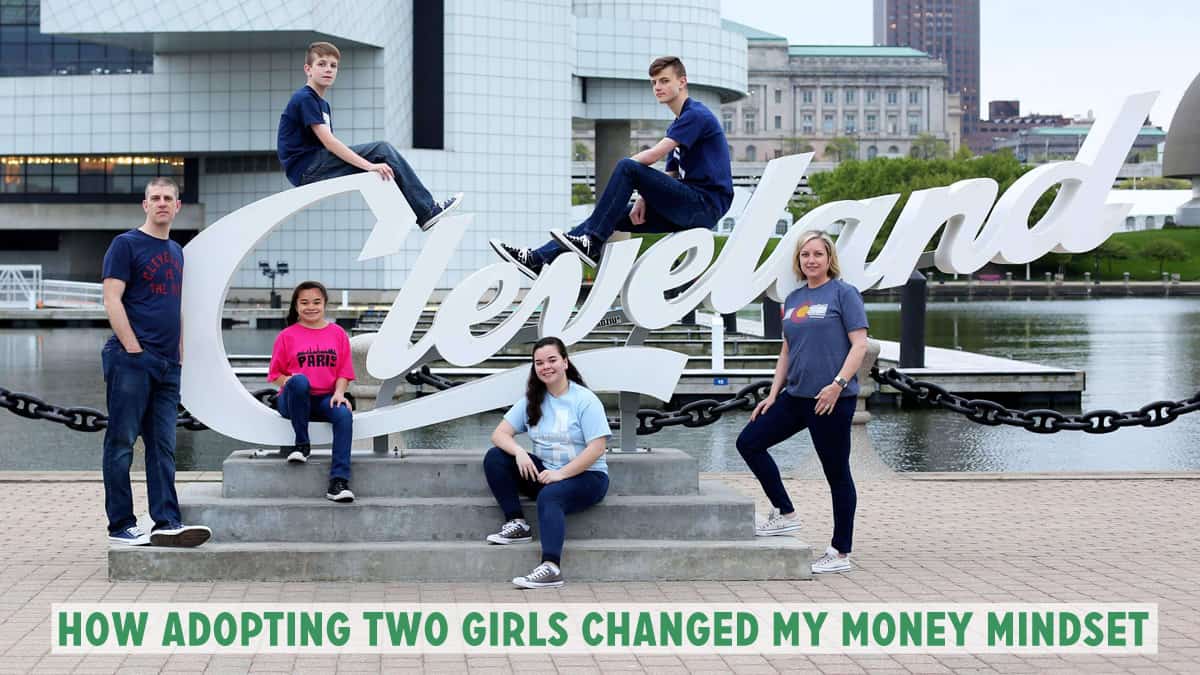 As I mentioned, we have two biological boys. They’re pretty cool — most of the time. At the start of our adoption journey, they were ages five and two. The girls were ages eight and five.

Their family suffered a couple of major health tragedies so that their parents were no longer able to care for them. They feared the girls would be taken away and put in the foster care system — possibly separated. As much as they didn’t want to lose them, they wanted to find a good family that would adopt them both so they could stay together.

I have so much respect for their parents and what they did for their girls, knowing it was probably the hardest decision they ever had to make. It turned out to be a smart decision. Both parents have now passed away.

Anyhow, the girls had come to visit cousins in Ohio for the summer. My wife, who is a teacher, heard about the girls’ story through a colleague. It was then that she sent me the text message.

Because we didn’t adopt through an agency or through overseas, our adoption costs paled in comparison to what many families pay. (This is another way in which our story is unique.) >We had costs associated with our home study as well as going through an adoption attorney in Florida.

What’s a “home study”? Great question! A home study is one of the most important parts of the adoption process. They’re required for almost every adoption.

A home study is just what it sounds like: a study of your life to assess if your family will provide a stable environment for adopted children. Home studies vary depending on the agency involved. Our home study included a criminal background check, interviews, references, training classes, a look at our finances, and a home inspection.

Shortly after gaining legal custody of the girls, we moved to a bigger house. We needed more room for our large family. For our home study, we had to update some of our house to meet safety standards. This included tasks like updating electrical outlets, installing new carbon monoxide detectors, and posting emergency contact info.

The average cost to use an adoption agency is $43,000. (Some agencies charge a sliding scale based on income.) An independent adoption through an adoption attorney can save families a few thousand dollars.

Some of these costs can be defrayed by government tax credits, but it’s still a lot of money.

I wish the cost of adoption wasn’t such a roadblock or deterrent for adopting children, but often that’s the case. I’ve heard some crazy stories. We were fortunate to receive help from many people, which helped defray our adoption costs.

Caring for a child is expensive, even if you’re frugal. Because we already had two children, we understood that the real cost of adoption would come after the girls became part of our family. This wasn’t simply a matter of adding two more mouths to feed, two more children to clothe.

When you go from two to four kids, you don’t just double costs. For us, it was way more than that.

It started with our cars. We couldn’t fit our newly-expanded family into our vehicles anymore! We had to purchase a minivan.

Plus, we’d already planned a huge family vacation with extended family for that summer. After just two weeks in our home, the girls joined us for that trip. The rented house at the beach had space, but we hadn’t considered the hotels to and from our destination. Most hotels aren’t set up for a family of six.

In fact, few things in this world are set up for a family of six!

That was just the beginning. Our family finances grew in many areas, including:

The increased costs that came from adoption weren’t just financial. All four of our kids needed individual attention. Each had very different physical, emotional, and educational needs. It was a lot to learn on the fly.

And our oldest son, who had been first in the birth order, now found himself third. That was a tough transition.

A Change in Our Financial Mindset

When I was younger, my dad took me on a camping trip. He and I visited several pro baseball ballparks. We also spent a day at Hershey Park in Hershey, Pennsylvania, where we toured the chocolate factory and rode roller coasters.

I didn’t realize it at the time, but that trip had a profound effect on me. It helped shape the way I view life and my role in the world. Now that I’m a father myself, I want to provide my wife and children with unique experiences that might help shape the way they view life and their roles in this world.

While this is a great goal, adding two more kids to our family makes the task much harder. As our family dynamic changed, so did our spending habits. Everything financial became tougher.

Until this point, I’d only given token attention to considerations like retirement, 401(k) accounts, college funds, and investing for the future. We weren’t broke and we weren’t living paycheck to paycheck. But we weren’t really prepared for the future either.

As I began to take a more active role in our family’s financial future, my passion for learning kicked in. I read books and blogs, listened to podcasts, and managed our money more closely. I was constantly looking for ways to save, cut expenses, and get rid of debt.

I still wanted to find ways to provide great experiences for my family, though, and that led me to discover the world of credit card rewards. I was able to earn enough points and miles for a nearly-free week-long trip to Universal Studios in Florida! 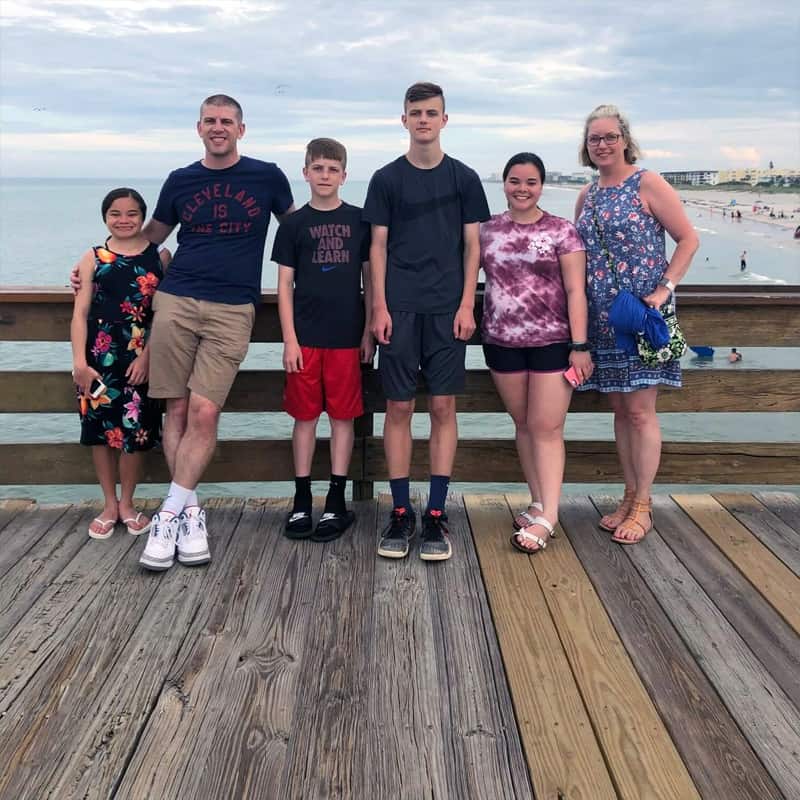 After a while, I realized that cutting expenses can save you money, but that only takes you so far. If you want to save more money, you need to earn more money.

I’ve always had an entrepreneurial spirit. I’ve wanted to start my own side business for as long as I can remember. Because I love speaking, I thought I could do that as a second career. I took an online course on how to start a speaking business and was super psyched to get started. The problem is that I have a full-time day job and most speaking gigs conflict with that. I wasn’t ready to make that sacrifice. There had to be another way.

I’ve had a passion for writing since I was a kid. Because I was learning so much about personal finance and budget travel, I decided that maybe I could write about that in my spare time. With four kids, spare time is a precious commodity! But I managed to steal a few minutes here and there. That’s when Family Money Adventure was born.

Great! I had my own website…but I wasn’t making any money. A side gig isn’t very good if it doesn’t give you extra income, right?

I was already a fan of Holly and Greg Johnson at Club Thrifty. When Holly launched her course on earning money through freelance writing, I thought this could be my way to create some extra income for my family.

I signed up immediately and got to work. I continued to write for Family Money Adventure, secured some guest posts (including this one!), and took some low-paying gigs to build a portfolio. From there, I’ve been able to slowly build my writing business, develop steady recurring writing gigs, and land higher paying writing jobs.

Note: Holly was a regular staff writer here at Get Rich Slowly for several yeas. In fact, she has 77 GRS articles to her credit, making her one of the site’s all-time top contributors.

The Sky’s the Limit

Today, I still work full-time but I’m building my side business. I wake early to write before my workday begins, and I often stay up late to finish assignments. I’m still able to spend quality time with my wife and kids. I even coach my son’s basketball team!

Yes, expanding our family meant making sacrifices. But I’m happy to make these sacrifices if it means moving toward a more secure future. I want my wife and kids — all four of them — to know that they can find success in whatever they’re passionate about if they put in the work. For me, it’s worth the late nights and sacrifice.

I didn’t know it at the time, but adopting two daughters was a catalyst that would start a new adventure. Without them, I don’t think I’d have felt the urgency to make financial changes. I was too complacent. I never would have learned to save. We never would have become more intentional with our finances. I never would have pursued writing — for Family Money Adventure or for freelance clients.

More importantly, if we hadn’t adopted our two girls, we would have missed out on meeting two of the most special people on the planet. Our family wouldn’t have been complete.

Kevin Payne is a freelance writer and the family travel and budget expert behind FamilyMoneyAdventure.com. He’s a regular contributor on sites like Club Thrifty, Millennial Money, and Student Loan Planner. Kevin lives in Cleveland, Ohio with his wife and four kids.

A Marketing and Communications Journey…

What is a lender? Mortgage…